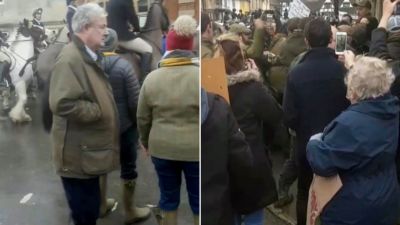 A Conservative MP has denied he was at the scene of a public disorder, even though footage obtained by ITV News puts him metres away from it.

James Gray, MP for North Wiltshire, is seen in the video standing near where punches are being thrown at the Avon Vale Boxing Day Hunt meet on December 27.

The footage, shot on a camera phone, shows the MP walking up the High Street in Lacock.

There are shouts of “shame on you” directed at the hunters as they pass by and for two seconds, the MP disappears from shot before the camera pans past him again, as he turns towards the horses, and the camera focuses on the disorder. Someone is heard saying “fight kicking off”.

In emails sent to constituents about the hunt, Mr Gray says it was “perfectly peaceful” and he’d “left the meet before any fracas seems to have occurred”.

ITV News has been able to verify the MP’s proximity to the disorder from two different camera angles.

Mr Gray has not responded to ITV News’ emails showing the video itself.

One constituent told ITV News the footage “actually appears to show him walking towards the ‘fracas’.”

James Gray MP says: “I absolutely confirm that the protest was perhaps noisy, but was peaceful while I was there.

“My understanding from media coverage is that some punches were thrown; but that was long after I had left. I cannot imagine what videos may have been put together to try to imply that I was there at the time of the punch-up.

“But I absolutely assure you that I was not aware of any fracas until I saw it on the local news that evening.”

He adds: “I do of course deprecate punch-ups of any kind, whatever their cause may be.”

‘Viewers will make up their own mind looking at the clip,’ says Labour MP Daniel Zeichner

Daniel Zeichner MP, Labour’s Shadow Minister for the Environment, Food and Rural Affairs, said: “I think viewers will make up their own mind looking at the clip, but clearly there was a fracas at the hunt, no one wants to see that.

He continued: “My concern is actually about trail hunting in general, because of the conviction of the director of the hunting office, just before Christmas, which very much suggested that trail hunting is being used as a cover for fox hunting, which is illegal.”

Following the disorder in Lacock, Wiltshire Police questioned six people under caution and enquiries are ongoing.

Police have previously asked for help identifying those involved in the disorder and would still like to speak with witnesses to events that day.