A fox was savaged and ripped apart by a pack of hounds from Prince Charles’s former hunt, despite an activist’s efforts to protect it against the illegal killing.

Footage shows a hunt saboteur lying over the wounded fox in effort to save the animal as the dogs are set on it. 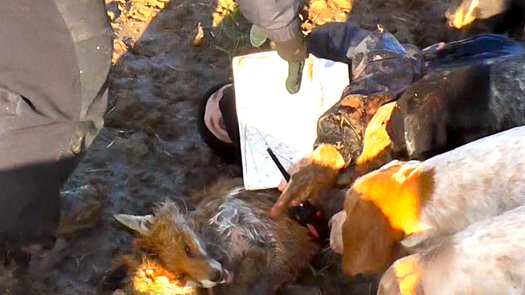 When the demonstrator asks a rider whether he has any shame over the kill, he shrugs and replies: “Accidents happen.”

Hundreds of people condemned the Quorn Hunt when the video was posted online.

The hunt had just set out on a regular outing from Nether Broughton, Leicestershire, when the fox was attacked. In the clip, saboteurs cry “leave it” to the hounds descending on the fox’s body.

An activist then cradles the dead fox in her arms as members of the prestigious hunt ride away.

The kill coincided with new figures that appear to show 126 witness reports of suspected illegal fox hunting in the six weeks since the first hunt meet of the season in late October.

The statistics, compiled by the League Against Cruel Sports via three specially produced maps, show “multiple incidents in which foxes were seen being chased by hounds”.

Of the 126 reports, six were verified fox kills and two related to suspected fox kills, the group says.

There were also 11 cases of livestock worrying by hunt hounds, the league says.

A spokesperson for Nottingham Hunt Saboteurs who filmed the Quorn hounds kill said: “It’s just really sickening the callousness with which they dealt with it and then they carried on hunting afterwards.

“They weren’t sorry. One of them on the video claimed it was an accident, but to me it was just a tokenistic thing.”

The Quorn Hunt meet three or four times a week, the saboteurs say. On its website, the hunt is promoting a Boxing Day “meet and ride”.

Hunting wild animals with dogs was in England and Wales banned under the Hunting Act 2004, which took effect in early 2005, but opponents say hunts regularly flout the law. The hunters insist they use an artificial scent, and when their hounds catch foxes, it’s accidental.

The saboteurs’ spokesperson said: “After 15 minutes, the hounds picked up the scent of a fox and chased it and killed it really quickly.

“We had a group close by who ran down to try and stop it. They saw the hounds chase and get the fox and they tried to get down there to help it.

“They jumped into the pack of hounds and they got the fox’s body but it had already been killed at that point.

“It is one of Prince Charles’ favourite hunts. The Quorn Hunt is one of the biggest and most prestigious hunts in the world.”

The saboteurs also said the hunt caused “traffic chaos” as riders hacked several miles up a busy A road.

They claim Leicestershire Police failed to enforce the law.

“We don’t even deal with Leicestershire Police any more because they’re so biased towards the hunt,” the spokesperson added.

“They don’t bother investigating and we don’t even bother reporting.

One Facebook user, Louise Martin, commented: “What a dreadful thing to do to an animal, it must have suffered such terror in its last moments.

“How anyone can think this is a ‘sport’ is beyond my comprehension.”

A spokesperson for the Quorn Hunt said: “Hunts are regularly subjected to spurious allegations about their behaviour but we can confirm that the Quorn Hunt were legally trail-hunting on 9 December to comply with the Hunting Act.

“Hunt saboteurs were present throughout the course of the day, purposefully distracting the hounds by blowing a hunting horn and playing recordings of hounds in action which only serves to confuse the hounds and take them out of the control of their huntsman. We urge the saboteurs to refrain from this behaviour.”

Asked to comment on the criticism, a Leicestershire Police spokesman said: “Those supporting hunting and those opposed to hunting are often very committed to their cause, but we police without fear or favour and provide a proportionate and balanced response to all reports made.

“At 11.45am yesterday (Monday 9 December) a report was made stating that a fox had been killed in Nottingham Lane, Old Dalby.

“An investigation into the report has begun. Anyone with information is asked to call 101, quoting reference 19*660002.”